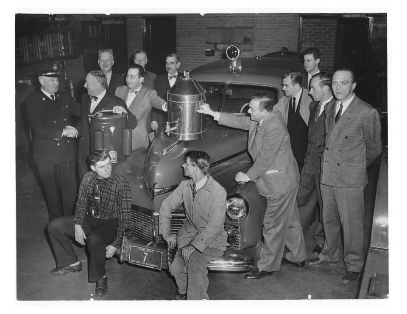 The Friendship Fire Association (FFA) started just before WWII when a group of business and professional leaders with a common interest in the fire fighting activities of the D.C. Fire Department banded together. After the war, they began serving hot coffee at the scene of multi-alarm blazes.

"A group of grown-ups that didnt lose interest because horses with glaring eyes and foaming nostrills quit pulling the fire-fighting apparatus have banded themselves into a fire-fan organization called the Friendship Fire Association.... The Association took its name from George Washington's engine company in Alexandria and intends serving the dual purpose of social get-together and civic undertaking, it was said. It will be addressed by fire-fighting authorities on such subjects as fire prevention and extinguishment, and hopes eventually to turn to procuring aid for injuried firemen and arousing interest, generally, in fire prevention. Membership will be kept to a minimum, inducing only men with an active interest in firefighting. Only responsible members are wanted"

It did not take long for the newly-formed group to put its mission into practice. World War II came along and the members who were not called into the armed forces formed the nucleus of DC's Auxiliary Fire Service.

Also, after the driver of Truck 1 was killed in an accident that was blamed on the inability of the other vehicle's drivers to hear the warning bell over other traffic noises, pressure by the Association, along with other citizens associations, succeeded in forcing the Commandant of the Military District of Washington to lift his ban on the use of apparatus sirens.