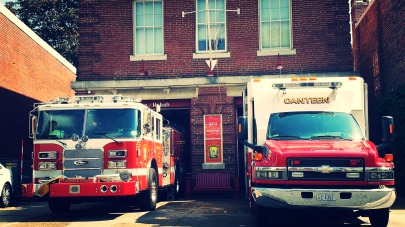 Friendship Fire Association is the all-volunteer support unit of the District of Columbia Fire and Emergency Medical Services Department.

*In October 2017, DC Fire & EMS assumed responsibility of staffing the Rehab Unit in order to increase and improve efforts to ensure the overall health and welfare of it's members. FFA continues to support rehabilitation efforts in the field on a as-need basis. FFA members assist personeel with providing refreshments and rehabilitation efforts when the Canteen Unit is not dispatched to an incident.

On October 13th Friendship Fire Association members were invited to the quarters of The Fireboat for a Annual cookout & Cruise on the Potomac River.  17 members and guests attended the event and were graciously hosted by The crew with the Marine Pilot being the cook for the evening.  Members attending the event had a great time and enjoyed the cruise.  The event was moved from a regular weekday to the weekend to provide a more relaxed time. A tip of the Ole Helmet goes out to the crew of Fireboat Platoon #1.

In the early morning of October  6th the Canteen Unit travelled to Emmitsburg, MD for the National Fallen Firefighters Foundation for the Annual Memorial Service to Honor the 80 Line Of Duty Deaths in 2017 and an additional 23 Line of Duty Deaths from prior years.  The DC Fire and EMS Canteen Unit was on the detail for about 13 hours providing a total of 52 service hours with 4 members FFA Served Hot Coffee, Iced Tea, Lemonade and light snacks & pastries.  FFA was also assisted by Bell and Siren Club of Newark, NJ and Independent Hose Co Canteen1 from Frederick, MD..  In addition on Saturday October 6th Canteen 422 & 422B provided service while members practiced.  Then at the Start of the Red Helmet Ride Anne Arundel Alarmers served in Millersville, MD and Montgomery County Canteen 705 (Kensington) with Prince Georges County Rehab Support 800 served in Walkersville, MD.  COFO Oliphant was the weekend leader for the Canteen Units.

Units in the 4th Battalian were awakened early in the morning of July 9th to find a blaze that involved the rear porches of some row dwellings. A second alarm was quickly sounded and after about 45 minutes of an aggressive attack the fire was brought under control. The Friendship Fire Association Canteen Unit responded and was on scene for about 2 hours and assisted in the Rehab Sector.

On Wednesday May 9th 2018 about 330pm Friendship Fire Association was alerted for a multiple alarm fire at 6500 Chillum Pl NW.  DC Fire Department arrived to find heavy fire conditions in a 2 story extreemly large irregular shaped warehouse.  As time progressed through out the evening fire conditions deteriated.  With limited access between the front and the rear of the building it was determined that the best course of action for FFA was to have 1 Canteen operation in the front of the building and 1 Canteen operation setup in the rear of the building.  After all said and done FFA responded with 8 Members, 2 prospective members and 1 past member staffing 2 Canteens operating for about 25 hours.  FFA was also assisted by American Red Cross NCR who provided 2 dinners and a lunch during our 25 hour stay.

On Easter Sunday April 1st, 2018 about 1415hrs DC Fire & EMS Department sounded the Working fire dispatch for the apartment building on fire.  Upon Fire & EMS arriving on scene they found heavy fire conditions in a 2 story apartment within a 4 story apartment building.  Units made an agressive attack and rescued a feline.  Units proceeded through gross decon and Rehab after knocking the fire down.  The Canteen Unit served for approx 1.5 hours with 3 members on scene.